If you are waiting for the epic motorsports update of my Bonneville Salt Flats history book first published in 1999, please know it is a year behind. I wanted to include the full 100 years of land speed racing, not just sell a book during the 100th year.

Bonneville: A Century of Speed published by the University of Utah Press will, hopefully, be available for sale sometime next year. I have been working on this massive chronicle for many years. It will contain several hundred thousand words and upwards of 1,000 photos.

Hundreds of interviews were conducted with world and national re 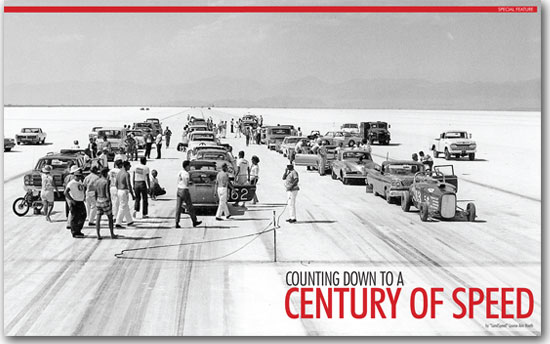 cord-setters, sanctioning authorities, engine builders, high performance parts suppliers as well as hundreds of crew members. Thousands of images are being collected from public and private archives as well as directly from racers, families and friends. Original art has been drawn, or contributed by skilled, expressive artists including the work of Robert Seabeck, Tom Medley, Robert Rampton, Rex Burnett, Connor Lock and Stacy Becker.

The point is to reflect an in-depth land speed racing historical narrative that is (pardon me, Mr. Lincoln) “of the racer, by the racer and for the reader.”  Information is also being culled from articles I wrote for the New York Times, London Daily Telegraph, Chicago Tribune, dozens of automotive magazines  and of course my Goodguys Gazette column “Fuel For Thought” that has appeared monthly for the past 12 years dedicated to telling the story of land speed racing.

Because I’ve had numerous people contact me about another project scheduled to debut at the upcoming Grand National Roadster Show in Southern California, I must state that I have nothing whatsoever to do with this venture. I am not part of, nor have I contributed to the Save-the-Salt fundraising project that sold pages to racers, promoters and parts suppliers.

Please be aware that although similarly entitled, my book and the fund-raising project are not in competition with one another.

One cannot buy pages in my book. This is a significant, historical retrospect that will be professionally edited and fact-checked by the university press staff, editors and distinguished reviewers. For a preview of what to expect, the Goodguys Gazette recently published my quick-study Bonneville summary in the October 2013 issue.

Make no mistake, I fully support efforts to protect and restore the Bonneville Salt Flats. It is my considered opinion, based on countless hours of unpaid research conducted at numerous public and private archives throughout the nation, that the Bureau of Land Management (BLM) has failed in its mandated duty to protect the federal lands in Utah known as the Bonneville Salt Flats. That the flats are also listed on the Federal Register of Historic Places (Reference # 75001826) makes the failing that much more egregious.

Today, the fastest speed machines are taunting the razor’s edge running on less-than-optimum surfaces made smaller, thinner and unsafe by years of unchecked mineral mining. The mining companies are not at fault. They are operating under a BLM approved, legal mining plan that fails to include any direct preservation or restoration directives. While the Salt Lake City BLM office is directly responsible for this debacle, apparently no one in Washington, D.C. seems to give a damn that treasured federal land is being legally and systematically salt raped. Gone are contenders for the absolute world record and now even slower (if you can call plus 400MPH slower) class hopefuls are feeling the pinch. If lack of oversight is allowed to continue unchecked, I firmly believe that land speed racing on the Bonneville Salt Flats will be severely curtailed if not completely halted for safety reasons within the coming decade. Unless, of course, Intrepid allows the racers to come and run on the north side of Interstate 80 on the where the salt is upwards of 10 feet thick after nearly a century of fetching salt off the Speedway for potash extraction.