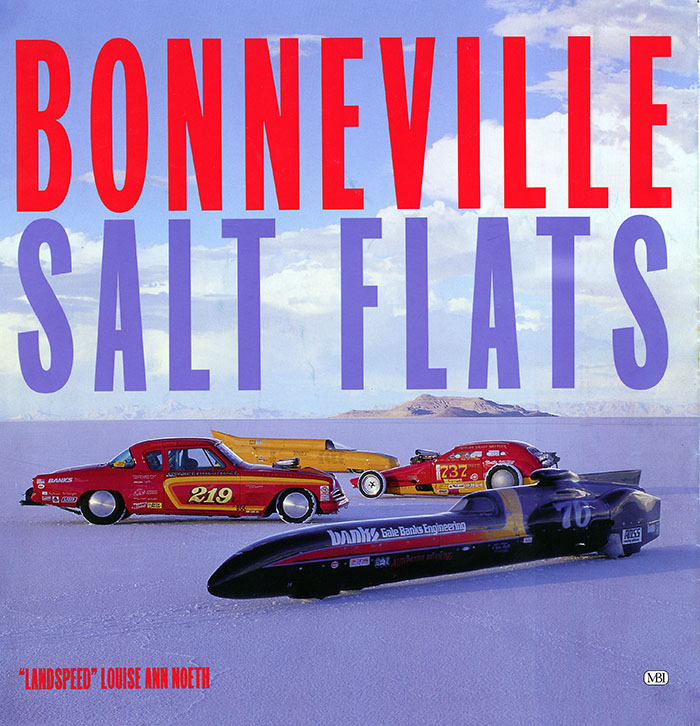 Spanning more than 100 years of land speed racing on the famed Bonneville Salt Flat, this chronicle is the first publication to combine the entire history in one place.

Now in it’s seventh printing, the book has won several awards for writing, photography and historical accuracy. Check out the samples from each chapter below. 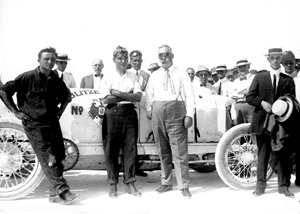 Chapter One . . .From the Ice Age to the Train Age

It’s 1914 and “Terrible” Tetzlaff (arms crossed) has just set a new speed record — the first on the flats driving the German-made Blitzen Benz, That’s Utah Governor Spry, still living the dream with the goggles on. Teddy’s riding mechanic casually leans on the front tire, probably wishing all the press would go home and he can back to working on the car. 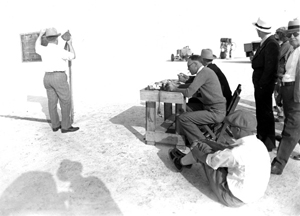 Chapter Two . . . If You Build It, Are They Supposed To Come?

Time trials were all done by hand with stopwatches back in the 20’s. Here Ab Jenkins roars by driving a souped-up Pierce Arrow from Indiana completing one of many laps on his way to yet another endurance record. It was decades before Jenkins ever allowed someone to help him co-drive; he was no doubt the first “iron butt” in motorsports, driving 24-hours non-stop and sometimes even more –just to be sure the record stuck. 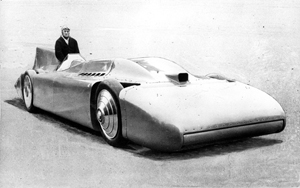 A rare photo of Sir Malcolm Campbell sitting in his monstrous-sized land speed racer affectionately called “Bluebird”. When he abandoned Ormond Beach (better known today as Daytona) for the salt flats, world record setting would remain in Utah for the next 50 years plus. 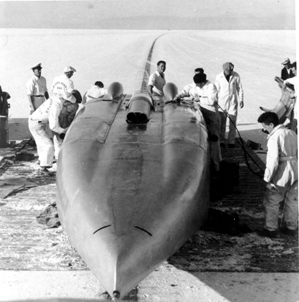 The massive eight-wheeled “Thunderbolt” of Englishman George Eyston is fueled on the line in preparation of a speed run in the mid-1930’s. The car never ran without having at least one tire deflate in the process. It is the biggest and heaviest car to ever set a record on the salt. Note the curve in the course.

For years Eyston was locked in combat with fellow Brit John Cobb who favored lighter, more streamlined vehicles. Cobb eventually emerged victorious nailing a 394mph record in 1947 that stood for more than a decade.

By 1949 the hot rodders of Southern California came to the salt. More than a half-century later, they are still here, holding the Bonneville Nationals Speedweek each August. The speed trials attracts more than 400 cars, trucks and motorcycles from all over the world achieving speeds that are now approaching 500 miles per hour. 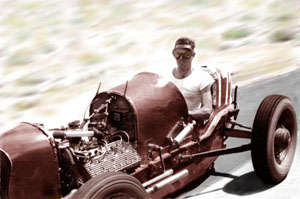 Dave Ratliff is doing what hundreds of record hopefuls did, breaking in the racecar engine while on the way to Bonneville. Most racers worked on their cars right up to the last minute before making the daunting 700 mile trip to the salt. The tow rigs struggled to crest the steep, high-altitude mountain roads and many a race car was pressed into temporary “mule duty” back in the 50’s and often wound up towing the tow vehicle! 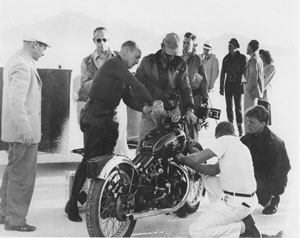 Rollie Free fuels the Vincent Black Shadow Motorcycle of John Edgar (far left) prior to his now famous World Record run. Just moments after this photo was taken, Free ripped his leathers on the trailer behind him and had was forced to ride nearly naked — in the prone position — to bump the speed past 150. Ab Jenkins (dark glasses) came to watch; he was the first to ride a motorcycle on the salt around the turn of the century. 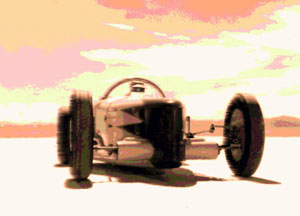 Chapter Seven. . . Learning to fly, or not

A classic example of the car that excited the hot rod community pulse: the venerable roadster, seen here from the salt’s perspective. Note the big hoop roll bar and leather helmet on the driver. Safety rules would soon start to drive race car development. 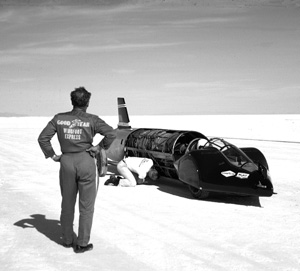 Jet car pioneer Walt Arfons surveys his Wingfoot Express prior to setting a new World Land Speed Record in the early 1960’s. A heart condition and cut tendons took Arfons out of the driver’s seat giving Chicagoan Tom Green a forever slot in the history books with a 403 mph average. Supremacy was fleeting as Arfons brother, Art, came along a few days later and snatched the record away. That’s how it goes, that’s racing, where speed is the deed to stay in the lead. 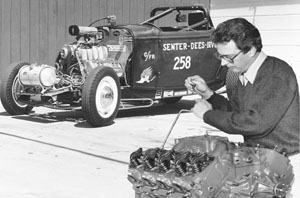 Tom Senter, renown for his snorting brute of an engine known as an Ardun, makes small adjustments to the heads. In the background is his wild roadster that he campaigned with partners Mark Dees and Geoff Irvin. This book is dedicated in part to his memory; he was dear friend of the author who would work on cars in his garage listening to tape recordings of cars making run at the salt. Turned up so loud, the neighbors actually thought he was staging races along the side streets. He passed away suddenly in the mid-eighties. 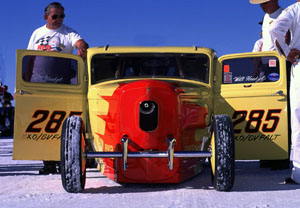 This is the world’s fastest coupe, driven by Will Handzel, that’s owner/engine tuner Doug Robinson on the left. 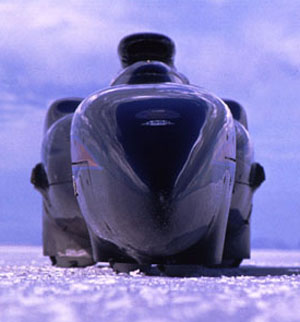 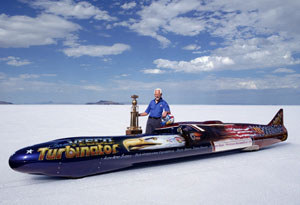 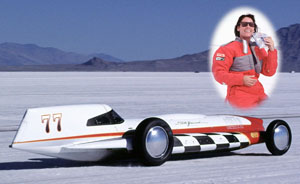 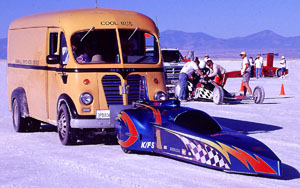 Chapter Eleven . . . The Nineties and Beyond

A head-on view of World Land Speed Record champion Al Teague’s “Spirit of ’76” supercharged streamliner. Teague, who is claustrophobic, set the stunning record of 409 mph in 1991. He is considered the hero of the hot rodders mainly due to his humble disposition mixed with an unquenchable zeal for homegrown, backyard engineering.

The late Don Vesco stands with the 458 mph Turbinator streamliner — the fastest wheel-driven car on earth. Vesco is holding the HOT ROD Magazine “Top Time” trophy” a honor he has won three times, the last in 2001 and presented for attaining the fastest speed at Speedweek. It is the oldest and most coveted of all Bonneville awards. Vesco is the only person to have held the World Land Speed Record for Automobiles (458MPH) and Motorcycles (318MPH).

Tanis Hammond often drove her husband Seth’s #77 lakester, and was the first woman to exceed 300 miles per hour. Built by Tim Rochlitzer, the car has put more people into the 200mph club than any other car in the sport: 16 in all. Sadly, at the end of the 2003 racing season, with Seth driving, the rear tire deflated sending the car into a series of horrific rolls. The car was destroyed, but Hammond survived and amazed everyone when he returned to land speed racing with a modified roadster the following season.