Great accomplishments, especially in sports, tend to cultivate admirers.  Sometimes the feat is so fantastic, or the ability to deliver repeated outstanding performance so incredible, that fans pop up in droves with a little help from the media.  Sometime these people are elevated to the exalted state of “Hero” or “Heroine” and they begin to reap the monetary benefits of generous endorsements packages, increasing their fame as they hawk a particular service or product.  “Appearance” fees can easily exceed their sports paycheck.

Over the past few years we have seen a lot of heroes and heroines, but I wonder if the moniker is rightly deserved. By my reckoning, people we admire, especially people our children admire, ought to be required to live up to the title by demonstrating more than the ability to whack, or shoot a ball, smack a puck, tackle a spandex-clad sprinter, or look good under hot camera lights.

Is it so much to ask of a role model to conduct themselves in a dignified manner, to live a life that will pass the test of time and not require an excuse? In other words, “Wow, what a tremendous (insert sport) player, too bad he beats his wife.”  What about those two pro-sports clowns who thought drag racing their exotic cars on city streets was macho until one of them punched out?”  Thankfully, the damn fool didn’t take any innocent bystanders with him.

If heroes and heroines want to bask in the limelight of admiration, it is my opinion that they should not:

• beat their spouses
• buy, sell, or use drugs
• be alcoholics
• be compulsive gamblers
• drink and drive
• assault people
• kill people
• steal sponsor money
• be arrogant and cruel to fans

The list goes on, but why take up space with what you already know?  The point is, if we, the spectators, the adoring fans, ignore the bad behavior, we send a message to our youth that acting irresponsibly, recklessly, and even criminally, is OK — just so long as you make the next game and score those points.  That if you play sports well, the world will forgive you acting like a horse’s ass, hurting people, lying, cheating and stealing.  Come now.  What rational, caring parent wants that ideology stuffed into their kids head?

If this great nation allows crummy conduct, then we as a nation fail not only to our youth, but dishonor our national heritage as well. Many of us learn by example and if the example set by our heroes and heroines is poor, then we had better not complain when the kids grow up without a sense a shame when they act badly.

When the baseball strike came along, it lost me as a fan.  One too many contract disputes over big bucks made it clear to me that the players and owners were playing the greed game. I chose not to let them worry about my money ever again.

Over the years the bad behavior has become bolder, meaner, and humiliatingly arrogant.  I was ashamed for the country when Charles Barkley spewed out his mean-spirited, snide comments about sportsmanship at the Olympics. I was astonished that bully Sprewell was allowed to again play basketball after attacking his coach.  That Pete Rose and Michael Jordan were such gambling addicts showed me they had more money than good sense. Let’s not forget the unconscionable conduct of Tonya Harding and crew.  As for the Iverson case, can someone tell me why the authorities allowed that jackass to cavort with abandon for days after he brandished a loaded firearm and physically abused his wife?

The team owners are not without blemish either, a survey by the editors of Sports Illustrated found that ticket prices have skyrocketed as much as 80% over the past decade. Excuse me, but the playing hasn’t got 80% better. Who needs em! Not me. Not America. Certainly not the youth of America. My disappointment with professional sports also extended into motorsports.  Sponsors have taken such a front and center role, splashing their corporate message like a tidal wave over the spectators in the hopes of dislodging the contents of their wallets, that the racing has actually started to take a back seat.  The merchandising is so overwhelming that fans are becoming “message weary” of the garish ,marketing display that subliminally nags fans to “spend, spend, spend”

I’m no fool.  I realize it takes money to campaign a pro car. Competing for points in a series can mean a dollar hemorrhage just to stay competitive.  However, what happened to racing for the love of the sport, not the thought of adding comma’s to a bank balance?

Things had just about got to the point where I thought all professional sports was a load of hooey.  Then I met a few land speed racers. Attended time trials at El Mirage and Muroc and met a few more.  Watched some fine driving, enjoyed some outstanding hospitality and reveled in the inter-team congeniality. By the time the Bonneville Speedweek rolled around, I had hardly noticed that I had become a fan and had found a whole new set of heroes and heroines.

It is marvelous how husbands and wives, sons and daughters, mothers and fathers, uncles and aunts, grandmothers and grandfathers, all combine to wage war against a timepiece.   The whole affair unfolds on one of planet earth’s most majestic natural wonder, a fragile, crystalline surface that has astounding resilient tenacity when it comes to supporting high-speed time trials. 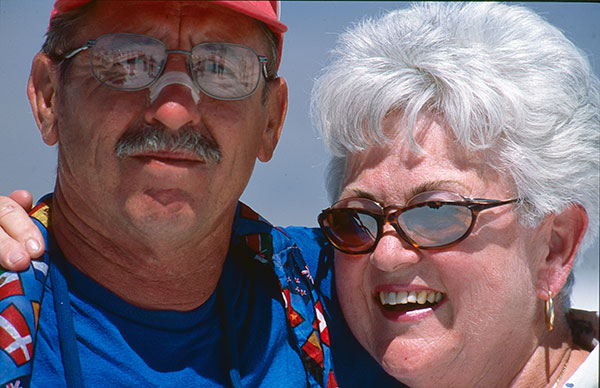 Land speed racers call themselves amateurs. Ha! Sure. Tell me another one. These people are as good as it gets when it comes to exhibiting professional competitive deportment. By nothing more than their actions and genuine humility for a homespun sport, they embody the best of what the American Spirit ought to represent. Aaron Copeland’s “Fanfare for the Common Man” plays in my head when I think of them. If this is amateur, America needs more of this and the “professional” would do well to be more like the land speed racer.

Nothing made this clearer to me than at the 200MPH Club banquet, an annual party where members who have exceeded the namesake speed, gather to recongratulate themselves, induct new members and pay tribute to the greatest among in the sport. Rounds of polite applause would sound as names were read, until Al Teague’s name was mentioned. Everyone began clapping, beers were abandoned and 300 people rose to their feet.

As for the man at whom the honor was directed, geez, he was in an awful state. It was obvious he appreciated the recognition, but he was obviously uncomfortable being in the limelight. Here was guy who the entire room admired. Why?

What I discovered was Teague is the hero of the salt, just a regular guy who had a dream that he built in his mother’s one-car garage and tinkered with until he got it just right. In eight years, I have yet to find anyone who had anything bad to say about the guy.

Here, at long last, after a long, weary search, was a true-blue American Hero. People admired him, racers tried to emulate him and fans were in awe of him every time he fired up his midnight blue streamliner and roared off down the nine-mile course in search of another piece of history. As humble as he is fast, this country could use a few dozen more like Teague. Oh, and by the way, he doesn’t beat his cheery wife Jane, smoke dope or speed on the street. Maybe that’s why he isn’t a household name. You think?