Most likely, the first musical instrument children of the 50’s and 60’s learned to play was a red and yellow Oscar Mayer Wiener whistle. This poor cousin of the woodwinds was a simple plastic-molded tubular flute that played only three notes, was considerably lighter than an accordion and nowhere near as complicated as a saxophone. Although the Wiener whistle never rated a “first chair” in any orchestra, it was nonetheless many a youngster’s cherished possession.

Weiner whistles were passed out by Little Oscar, the world’s smallest chef, precious gifts that emerged from third generation bubble-nosed Wienermobiles designed by the late Brooks Stevens of “Excalibur” neo classic car fame. The first Wienermobile hit the streets in 1936 and today the tube fleet stands at 12, including two in Japan and Spain.

After seeing the latest Wienermobile in a few TV ads I thought, “Why settle for just a whistle? Why not get my hands on the whole weenie?” The Madison, Wisconsin based sausage company now has a fleet of 27-foot-long, 10-foot high wienie-on-wheels — the seventh generation Wienermobile.

Sniffing out the top dog in charge, Russ Whitacre at Oscar Mayer, I mustered a good portion of enthusiasm and pitched him about conducting a Wienermobile test drive. Frankly, I never thought he’d bite, but after a few minutes he conceded my idea “cut the mustard” and agreed to a two-day Wienermobile test.

The Wienermobile design underwent tests in the wind tunnel at California Institute of Technology in Pasadena and could, theoretically-speaking; haul buns at speed in excess of 90 miles-per-hour. The best around Ventura County to safely try such a hair-brained stunt was Point Mugu Naval Air Station. The base has nice long, wide runways and plenty of crash equipment if were to scramble the test and if not, then why not have top dog meet top gun afterwards?

Built on a General Motors truck chassis, the new 21st century Wienermobile weighs approximately 100,000 hot dogs and is powered by a V8. The plan was to squeeze out 100 mile-per-hour speed run on Mugu’s 927 active runway in between F-18 takeoff and landings. Escorted to the active runway by the base crash truck, we were only able achieve a disappointing 80 mph. In the dog’s defense, it had to buck a 20-knot semi-cross wind and negotiate a pair of four-inch thick safety cables laid across the runway.

On the return run, the Wiener was told to wait because of C130 traffic on the runway. Once clear, I drop the transmission into first gear and smash the throttle into the firewall. In what seems to be eternity, the big dog’s “at rest” inertia is overcome and we are hurtling along like cold mustard out of a clogged orifice.

I’m told later that several jets were put into holding patterns until the noble Wienermobile finished making its “high-speed” run. Odds are that was the only time those jet jockeys had to line up behind a giant hot dog to land. But can you imagine the visual from the control tower? How about the air traffic controller who cleared us onto the runway?

I am told that Wienermobile stories persisted for days afterwards, probably instigated by those two fly boys in the 2-seat trainer who nosed into the dog while we were entertaining the hanger crews and passing out wiener whistles. Yeah, they still have those thing. I still have mine, it’s more than 40 years old.

Next stop was a Rolls-Royce and Bentley dealership to see how much they might give us in trade. Leaving the dog parked smack dab in front of the Flying Lady statues we bounced into the showroom. The manager ignored us, but we passed out wiener whistles to everyone else in sight. A Chevrolet dealer down the road was more accommodating, saying he’d have to check his records to see what he paid for the last Wienermobile trade-in.

Rolling down one of the many mountain grades of the Santa Monica Mountains, I pulled off the highway when I thought the brakes smelled a tad bit too toasty. The binders checked out fine, but before we could get moving again a Sheriff’s deputy rolled up, joined by a second cruiser a few moments later. We were “released from custody” upon surrendering of several wiener whistles. Hmm, maybe these musical sausages might have a new value the next time I get pulled over?

Technical specifications aside, when you finish driving the Wienermobile any length of time on public roads, your face begins to hurt. You smile at everyone, your jaw aches from all the mirth. If you are a singing ham, like I was, then the public address system will be your tool of choice whilst prowling the roadways. Pulling up to a traffic signal, I would grab the mike and begin having a one-way conversation, or singing one of advert jingles to the car next to me. If they ignored me, I would doggedly follow them until they acknowledged our meaty presence.

You might expect a test drive relate the experience of the vehicle’s performance, handling characteristics and comfort level. With the Wienermobile, the highlight was the look of pure, unchecked joy that spread across the faces of children’s faces, even those trapped in grown-up bodies.

According to my designated “hotdoggers,” Monica Lopez and Moe Drane, I was the first automotive journalist to a test drive of the Wienermobile. Gee Whiz, they even made me an Honorary Hotdogger and gave a signed proclamation to that effect. Code-named, “Yummy,” the eight-foot wide fiberglass dog in a bun isn’t that hard to handle. If you can keep the top of the wienie out of the trees and not scratch the buns below, the rest is just a matter of keeping the top-heavy red-hot in an upright position.

With an estimated 60 percent of the Wienermobile’s 5-ton weight above the “mid-bun” line, executing tight turns is risky. This is one machine that should be driven with caution. The brakes work well, but are noticeably mushy in stopping the big dog. The ride height puts you at eye level with tractor-trailer drivers, but I would venture a guess that driving the Wienermobile in a crosswind might put one’s neck muscles on red-hot alert.

My only regret was not having the time to visit the local vegetarian restaurants . . . dog gone it. 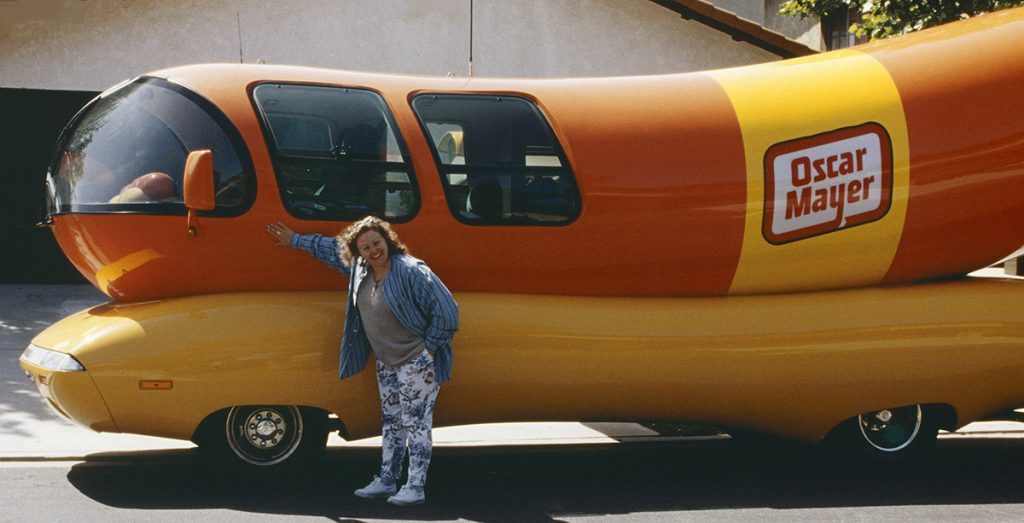