It has been a long time since I covered a drag racing event. The track closest to our home closed just as we moved into the area so it was with great anticipation that I marched over the Mississippi River to Madison, Illinois and enjoyed some staggering energy output by the racing community. That two of the pro contests were decided by red lights added to the drama, topped by Courtney Force slathering me and Mick with rubber dust as I photographed her along the starting line rail before she whacked the wall — that clutch was waaaay wrong. Days later, I am STILL cleaning up the compound off everything we took out there.

It was very satisfying to watch Erica Enders earn a Wally in the GK Motorsports Cobalt — her 4th of the season! She had, however, won the whole event a couple days earlier from where I observed. On Friday, Erica had graciously agreed to meet, greet and show 11-year old Autumn Looney, daughter of our racing enthusiast friend Brian. You could see her young mind spinning as Erica showed her the interior, where she sat and how she shifted the car. Autumn was speechless. Erica invited us to stick around and watch them test fire the car.

Later that day, when Erica set low E.T. to earn the #1 qualifying spot, I thought Autumn would come out of her sneakers she cheered form the stands. This is mentoring in full force. A small, tender hospitality that will resonate with a young girl as she grows into adulthood. Who is to say what Enders gift will bring? This much is certain: Autumn has someone real to remember, someone who took time to let her into the professional racing world, Autumn knows it is possible for her to do the same should that be the path she chooses. The kid is a swimmer, she competes in the butterfly category and anyone who swims will tell you that’s one tough stroke to master.

Special thanks also goes to defending Pro Stock champion and new Bonneville 200MPH Club member Jason Line for offering up a pair of passes to Autumn and her dad for Friday’s qualifying.

Here are a few photos that resonated with me. Enjoy. 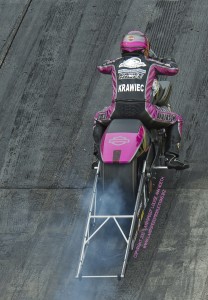