LandSpeed Louise comments: “Keen kudos to Karl for his exceptionally complete and correct contribution to the historical record of land speed racing. His book has garnered the attention and respect of not only very appreciative readers, but that of colleagues. Until Karl dug in, most motorsports people today had no idea what Railton did, had forgotten, or that he ever existed. Readers have but to scan but a few pages to realize what a void has been filled. All should be prepared to be absorbed into yesterday. “ 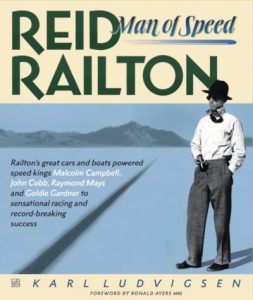 LONDON (Oct. 19, 2019) – Karl Ludvigsen’s book, “Reid Railton: Man of Speed,”has won the coveted Nicholas-Joseph Cugnot Award (English) for 2019. Presented by the Society of Automotive Historians in the United States, this award is made each year to the book that best advances the understanding of the history of the automobile.
Supported by Railton’s daughter Sally Railton Joslin, “Reid Railton: Man of Speed”is the first book dedicated to the life and career of Reid Antony Railton, automotive engineer par excellence and the creator of an extraordinary range of cars. He rose to renown during the 1930s as chief engineer at Thomson & Taylor, Brooklands-based racing-car builders. There he realized the dreams of that era’s top men of speed, including Tim Birkin, Malcolm Campbell, Whitney Straight, John Cobb, Raymond Mays and Goldie Gardner. His great cars powered them all to sensational racing and record-breaking success.
“It was the joy of a lifetime to have the opportunity to write about Reid Railton, whose work I have admired for many years,” said Ludvigsen. “I was especially happy for my work to be honored this year, when the SAH celebrates its 50th anniversary. It is also significant for readers to be reminded of Railton at a time when the Bloodhound, another great British land-speed venture, is nearing its first major trial in South Africa. Its aerodynamicist wrote the book’s Foreword!
“I was lucky in finding revealing Railton vignettes such as his solving of a mysterious noise in a Hudson prototype. For a 21st-century audience I endeavored to set Railton’s work within the context of his times so it could be better understood by the modern reader. I hope this contributes to a better appreciation of the career of an engineer who deserves to be ranked among the greats of Britain and the world.”
Published by Evro Publishing in April 2018, this magisterial two-volume work by one of the world’s foremost automotive historians tells Reid Railton’s personal and professional story in superb detail and fascinating depth. Set against the turbulent background of the 1930s and 1940s, its special focus is on Ludvigsen’s interpretation of Reid’s unique insights – amounting to genius – and technical accomplishments. All are illuminated in 1,000 images in this superbly designed and beautifully produced book.
The Nicholas-Joseph Cugnot Award (English) is this book’s fifth award and its second in the United States. Its other awards are the Mercedes-Benz Montagu of Beaulieu Trophy (presented by the Guild of Motoring Writers), the Royal Automobile Club’s Specialist Motoring Book of the Year, the Michael Sedgwick Award (presented by Society of Automotive Historians in Britain) and Best Automotive Heritage Book (presented by the Automotive Heritage Awards). 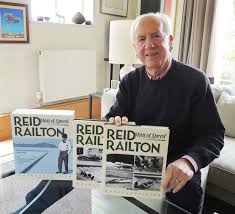 About the author:
Karl Ludvigsen is respected as a close and knowledgeable observer of, and participant in, the world motor industry. In addition to his activities as an executive with GM, Fiat and Ford and head of a consulting company, he has been active for over 60 years as an author and historian. As an author, co-author or editor he has some six dozen books to his credit, most concerning cars, drivers, racing and technology, his life-long passion. Many have been garlanded for their high standard of writing and research. The 2019 SAH award is Ludvigsen’s fifth Cugnot prize. He and his wife Annette live in Suffolk, UK.