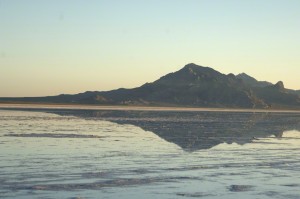 September 8, 2015 – The Save the Salt Coalition and Utah Alliance are working closely together as advocates for the land speed racing (LSR) community to protect the Bonneville Salt Flats (BSF). The following is a report on current actions.

The Save the Salt Coalition is an international group of businesses and organizations with a vested interest in the BSF. The Utah Alliance provides expertise and connections at the state and local level. Major LSR sanctioning organizations are members of both groups. The two groups have partnered on the shared mission of restoring the BSF as the premier venue for setting world land speed records. The collaboration allows experts within the groups to undertake specific projects.

The cancellation of four of the five major racing events for 2015 due to weather and deteriorating conditions has helped place a spotlight on Bonneville. As a result, the Save the Salt Coalition and Utah Alliance have already had extensive discussions with officials at the U.S. Bureau of Land Management (BLM) which oversees the BSF, mining officials, geologists, engineers, lawmakers in Congress and at the state and local level. Numerous press interviews have also conveyed the plight of the BSF to the world via newspapers, magazines, websites and blogs.

Two educational meetings have been now scheduled: one for the public (Sept. 9) and another for elected representatives, government officials, industry and other interested stakeholders (Sept. 14).

The second briefing will take place on September 14th at the Bonneville Salt Flats. Representatives from the two Coalitions will conduct a private tour and present the racer’s perspective to government, industry and local community leadership.

The private tour will allow the parties to engage in follow-up discussions and begin identifying tangible restoration actions. Both groups have already identified a number of short- and long-term actions to be considered. They include expanded brine pumping, barriers to keep the pumped brine within the racing area, and targeted dry salt laydowns. Reaching consensus on actions to be taken will be assisted by BSF core samplings to be taken this fall and winter by geologists, and consultations with engineers and water experts.

Conveying information is also critical. Toward that effort, the Utah Alliance is creating a website repository of photographic, film and historical documentation about the BSF available to everyone. The website will be unveiled in the near future. It will be an additional resource for the main www.savethesalt.org website which serves to keep the public informed of day-to-day actions.

Save the Salt Coalition