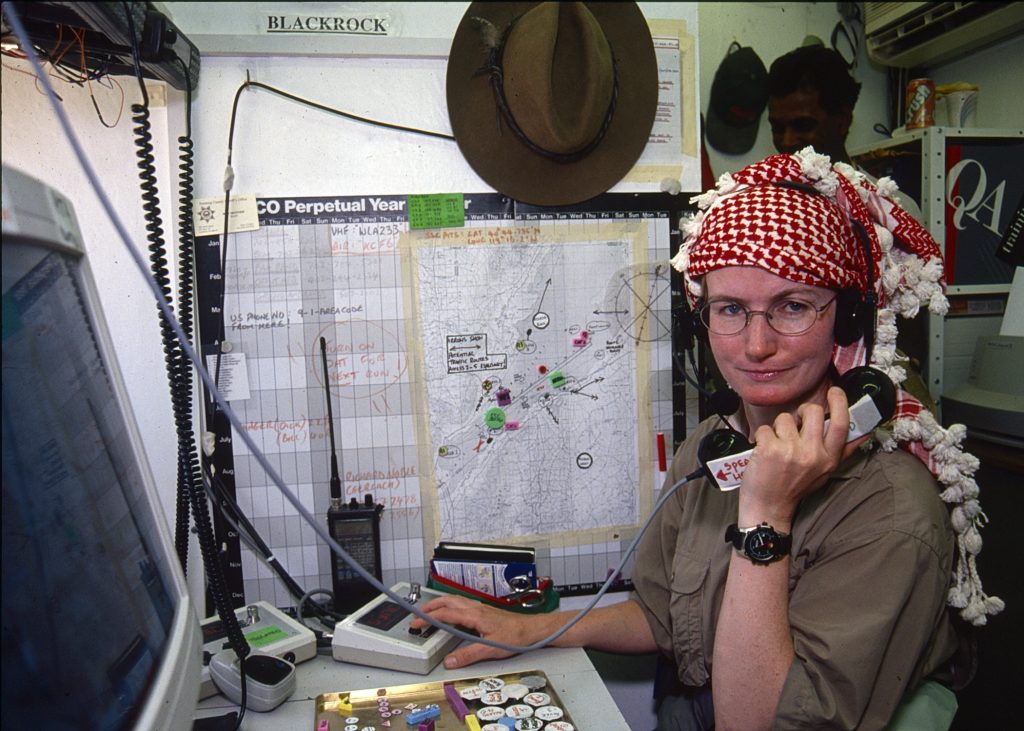 At St Clement Danes church in London on June 19th, 2017, we  sat silently in the pews, and most said  farewell to an Air Commodore of the Royal Air Force, but for me it was  “Vaya Con Dios Desert Witch.”

Out of uniform, she was simply, wonderfully a loyal friend, with which to drink copious quantities of champagne, and explore some beach, woodland, or castle when we were not on some crazy adventure out on the Bonneville Salt Flats.

In September 1997, it was a rag tag bunch of dirty Brits I met on the Black Rock Desert. It was not their fault, even the Queen would look like a bag lady after a few hours out there where the dirt particles measured out at one micron and got into everything whilst sticking out its miserable tongue at any filter, or barrier put in its way.

It was that alkali plain, a frontier remnant tucked into the northwest corner of Nevada where the British ThrustSSC team brought its 54-foot black jet car that looked more like comical, super-sized binoculars than a supersonic speed machine. It promised to be quite a show trying to get those 10 ton rolling field glasses to behave at Mach 1 whilst gulping down 125 gallons of fuel per mile and covering a mile every four seconds. 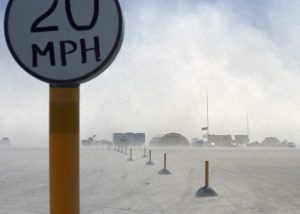 Led the bombastic force of nature better known as Richard Noble, ThrustSSC came to do supersonic battle with five-time World Record champ Craig Breedlove and his gleaming white Spirit of America, version 3. The smart money was on Breedlove, not Noble’s twin-engine beast.

I was a photojournalist on assignment for Sports Illustrated, and more than a dozen major newspapers and magazines that represented a combined readership of some 15 million.

I didn’t know any of the green-shirts from over the pond. Fortunately, being married to Brit, I knew it would be hard for them to pass up a bar after a hard day’s work, so that’s where I ambushed ’em. Buy a drink, get a quote. Worked a charm.

That’s how I met Jayne the Desert Witch, a strawberry blond who carried herself with quiet grace of one duty bound. As the team’s crack communicator, she juggled, if I recall correctly, at least 6 different radios that communicated with not only the biological unit, aka the driver, but a bevy of SSC crew spread out around the desert attending to the car and its safe operation.

Officially the ThrustSSC Run Controller, Jayne will forever be fondly remembered as the “The Voice of Black Rock” by anyone who ventured out to that forsaken arid wasteland hoping to witness a hard mark in the historical time line.

She discovered that hundreds of curious speed junkies were scattered throughout the desert perimeter watching with rapt anticipation for any high-speed movement. The trouble was there was no radio coverage, this was “Nowheresville, USA” where confusion and frustration ruled the day. The situation gave rise to some mighty fantastic rumors and misinformation.

And here is where I got my first lesson about what Wendy Jayne Millington was made of – she managed to get a hold of the scanner, and citizen’s band (CB) frequency’s used by most all spectators, and took it upon herself to broadcast run updates several times a day from her shipping container turned communications HQ.

It wasn’t long before that voice was beloved by all who heard her clear, concise reports. Rumors came to a screeching halt – if Jayne hadn’t said it, it probably wasn’t true. 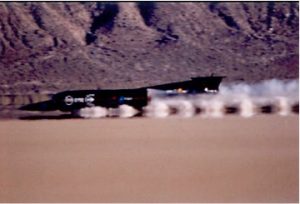 Know this: when THRUST SSC earned absolute speed bragging rights after recording a Mach 1.02/763mph average on Oct 15th, some of that success tracked directly back to her.

Spectators made a poster-sized thank you card that they circulated up and down the perimeter road getting signatures and comments of gratitude. It was formally presented – where else? In a bar. Jayne was touched.

She kindly spent a great deal of time answering my many probing questions unruffled giving me clear perspective of her role and team’s missions goals. No umbrella girl here, this gal had skin in the game.

Jayne was in. All in. You couldn’t pull her focus anymore than you could slide Velcro sideways. I managed to get access to that metal box she sat in during a run and marveled at her deliberate, controlled execution of radio communication as she picked up, transmitted and went onto the next microphone with the next report, or instructions. All the while re-positioning the many little magnets on the board next to her that kept track of who and what was where. Call her a one-woman ATC.

When the team went home, Jayne and I kept our friendship going with many a visit back and forth over the next 20 years. I watched and marveled as she steadily rose in rank to Air Commodore, a very cool title that I had to research to figure out its equivalent in the USAF.

When she was the big boss of RAF Boulmer in Northumberland, she gave me a tour of the facility that essentially kept all of the UK skies safe from threat. The underground warren of technology and battle readiness was concurrently overwhelming and comforting. Lets just say, the UK airspace was rather good and safe when Jayne was in charge of Boulmer’s 1,100 staff. You sleep better knowing how many folks are on duty keeping an eye on the skies for bad guys – in the UK and in the USA. 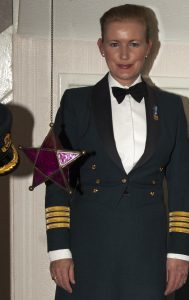 On base, Jayne gave me a halting, nasty frown when I burst into laughter as airmen and women stopped in mechanical mid-step to salute the car we were riding in – complete with little fluttering flags atop the headlamps. I apologized, but reminded her that while she had been saluted for years, this was first for me. All was well when I bought a bottle of “champers” that turned into 3 before the weekend was done. 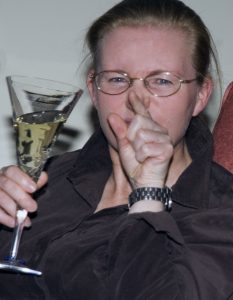 Her RAF call sign was “Desert Witch,” yet she anything but. Immaculately presented, impeccably polite and eloquent, Jayne was very much a RAF officer, devoted to the job and the people under her command.

Throughout the week, this civilian observed that she earned the respect, never demanded it. And at the grand dinner replete with white table cloths, silver, trophies, port and madera, the girl was every inch saluting material.

She managed RAF Boulmer while it was in great military and political upheaval, which she took in stride, and kept it mighty tidy amidst a maelstrom of change, challenge and chaffing. RAF Boulmer today has Jayne’s fingerprints all over it.

I will be forever grateful to her for the full day tour deep down in the bunker of the tremendous radar facility with ginormous huge, whopping thick steel doors, where they had a “bat phone” hotline to tactical air squadrons. When they let me scramble jets — got to push the button that unleashed holy hell – it was right up there with hanging out with the Martian Rover guys at JPL.

We spent a lot of time walking on the beaches and visiting Dunstanburgh Castle—one of her absolute favorite places on the coastline. We picked wild onions along the beaches and I made fine french onion soup back at her dandy fine digs while she introduced me to kippers.

When Jayne came over to the states, we would often go to Bonneville, or hang out in some grand spot for a few days of socializing. On one road trip from southern California to Bonneville as pit crew for Charles Burnett III who was sorting his land speed licenses in advance of his steam car world record attempt. Trundling through Nevada in a 30-foot motorhome, on a whim, we diverted to the “Extraterrestrial Highway,” aka Area 51.

Jayne had filled the long miles with stories of Red Flag exercises where she had been the RAF lead at Nellis AFB. The “mission” is cooperation among various nations teaching their fliers to play nice with each other in the sky and practicing various battle maneuvers that included lighted tracer dummy bullets.

Parked on the side of the Alien Inn in Rachel, Nevada, for the evening, we met a variety of UFO enthusiasts who proceeded to tell us – with rapt gusto – all about the weird lights in the sky we might get to see. 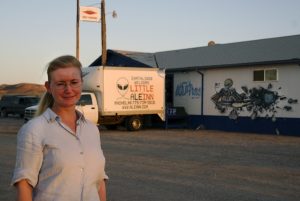 Jayne was all poker face, but I nearly spit out my Pinot Noir when the guy yells in his best too-tight knicker voice, “See, see, there they are, the aliens are back.”

Of course, it was another Red Flag gig overhead, but who were we to spoil the fantasy?

The next day I was determined to “see” Area 51 for myself and drove that big box coach across scrub desert, up and over hills into the mountain. A pair of stern faced Airmen in a battle-ready camouflaged Hummer stopped us. Jayne was amazed that I could drive the rolling box just as well in reverse and almost as fast. I figured it was best not to get jailed as she’d might have a harder time explaining things than I would.

A few years later, when Jayne the Air Surveillance and Control System Force Commander for the whole of the UK, she once more was responsible for a near fatal wine breach. I was watching the local news on TV at home in California when the anchorwoman starts rolling footage of the London Olympics reporting that rockets were being installed on roofs throughout the city as a safety precaution.

I will give you one guess who did that. When I called her the next day, Jayne was non-nonchalant about the whole thing saying, “I got the idea from you lot in Atlanta.

Of all the military ThrustSSC folks, she is the only one I know that was formally presented to Queen Elizabeth for her remarkable, enduring military service to the commonwealth. A big day for a little girl from Chester.

Every blessed Christmas there arrived the card from Jayne with “Do not open until the 25th” It was how I learned about Heifer International, a charity devoted to ending hunger and poverty that provides needy folks with all manner of farm animals in order to allow them to be self-sufficient. I figure through the years she donated a barnyard full in my name and I now do the same each year for my dear ones.

What started as a bad cough last October, grew more wicked and menacing until the doctors ran out of ideas about how to stop the unrelenting barrage of cancer cells. A resolute spirit who gave a fine accounting of herself in every regard, I salute her and offer this missive a way to grieve, to share a bit about a gal who loved speed attempts just as much I do. 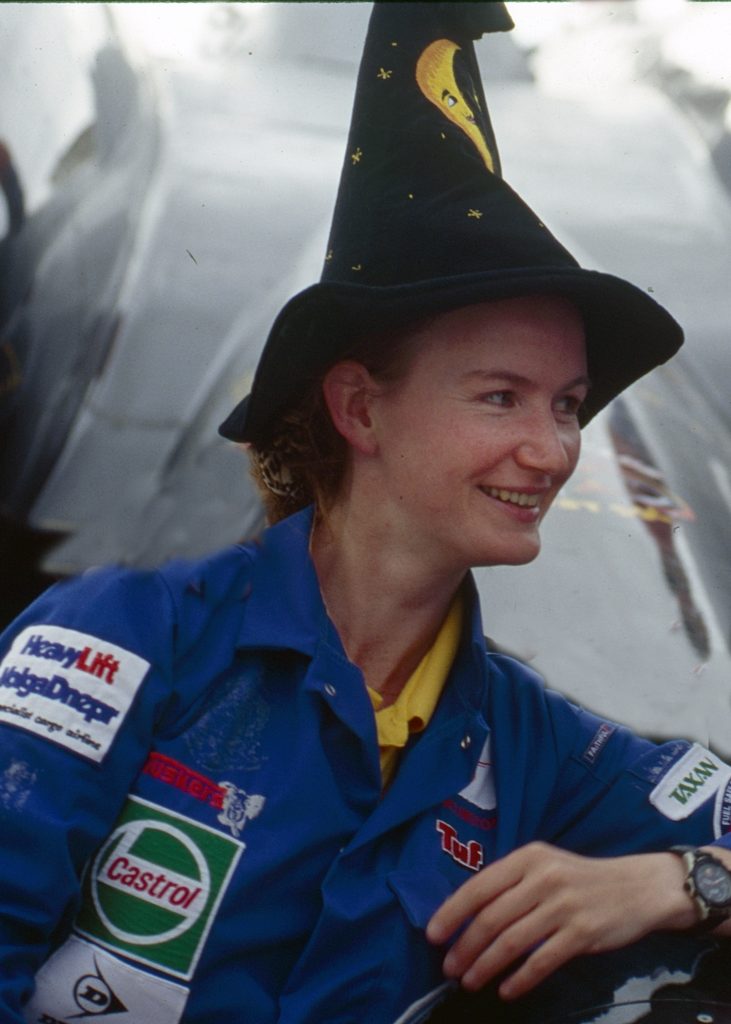