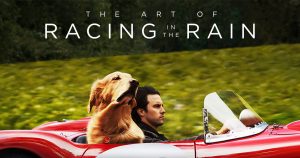 If you want to see tire screeching, big-screen heart-thumping race car battling go see something else. This ain’t it.

What you’ll get from this film is a splendid, honest portrayal of Garth Stein’s book that explains – in the most believable way – precisely what motorized competition is all about. And it ain’t sponsorship.

Here, direct from the thoughtful, passionate, discerning mind of a dog, the audience learns what it takes to be a winner on the race track. Any race track.

There is a refreshing lack of razzle bedazzle Hollywood crazy stunt driving. In fact, the many multimillion dollar race cars are merely respectful window dressing, allowing the more important aspect of the absorbing 109 minute story to be delivered one believable, welcome bit at a time. Frankly, anyone who ever earned a checkered flag will cheat themselves by NOT seeing this film. The rest will come away knowing their time was well spent. This is a story well told.

There is no fidgeting, no boring bits, or eye-rolling stupidness. This film is an invitation into the head, heart and mind of the world’s top race car drivers.

Interestingly, most of the profound comments from Enzo the dog (voiced by Kevin Costner) come straight from real deal racer/instructor Don Kitch Jr who has driven the talk for decades. The guy understands lefty-righty grab the pedal almighty just like he understands how to breathe.

And about the storyline. . . Milo Ventimiglia plays Denny Swift, a determined, talented road racer who earns his living wage in a Seattle auto repair shop but drives for glory on the weekends seeking a chance join the professional ranks. He gets the girl, and another girl before all hell lets loose, but Swift never lifts thanks to Enzo.

Stein was sincerely influenced by a National Geographic show about dogs in Mongolia. Having spent extended time in the Steppes of Asia, that aspect of the tale resonated with me on several levels.

This film is a grand cinematic journey that some might want to take more than once. I will.