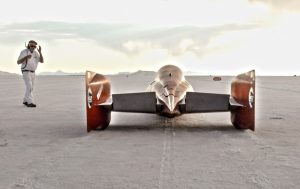 Age is superfluous at Bonneville. Young or old, it is all the same: wide-eyed wonder of a regal place constantly swirled with a riot of color, cackling thunder ripping out of homebuilt metal magic and the indescribable feeling of being so incredibly lucky to be there, to take part, to bear witness to the heart of motorsport still so pure and so welcoming.

You marvel that it exists at all.

That’s what coming to the Bonneville Salt Flats for the first time does to most everyone. It doesn’t matter what you might have read, heard, been told or watched, the real deal is a gargantuan knockout. Some freely admit this while others pretend not to be affected.

Oh, but pity those liars in denial for they rob themselves of pure joy, of being immersed in the saline speed dimension. Such people remind me of some teenagers that are so wrapped up in image and showing off the latest trendy thing that life’s most important parts rocket past them.

Forget the speed machines for a moment and simply consider the place. It is such a place that astronauts use the salt’s splendid immensity and stark, shimmering whiteness as a landmark whilst orbiting the earth.

Such a place that if you get your butt up and out of bed before the sun and manage to be present for the fiery orb’s awakening then you will be treated to unexpected grandeur, a brain-stretching vista that often invokes a dose of humanity humility wrapped up in a personal outpouring of thankfulness.

There is something inviting about being reduced, put in your place, made to understand how stinking small and insignificant you are in relationship to the planet. It made me feel honored to be there and later, it made me very protective of the place which is why I am intensely annoyed with the BLM for not being likewise invested.

If you drive out from Salt Lake City you get a good sense about the place as it requires you cross the salt to arrive at the access point just outside Wendover UT/NV – take your pick there are two of them with the state line painted right down the main drag.

If you have lots of coin, and few brains, you can try to access the salt from the interstate but make sure you have cell coverage or a working CB because when you get stuck you will be stuck like nothing else you’ve ever encountered.

Spinning your wheels only drives the vehicle deeper into the plastic-like mud that has been trapping things since well before the Conestoga wagons got mired. The salt flats are thick in the middle but thin out to practically nothing on the edges.

And yes, it is salt, just like the stuff that comes out of the shaker at home. Taste it. Most everyone does whether they admit it or not.

Driving in the from the south, on Highway 93, is a ‘peek-a-boo’ way to see the salt as the mountains rise and fall giving you only a hint of the place here and there along the road until it opens up and wows you as you near the Wendovers. The most dramatic way for salt virgins is from the West as the Silver Island mountain range blocks the view of the salt until you pass through the Wendovers and take the #1 exit. 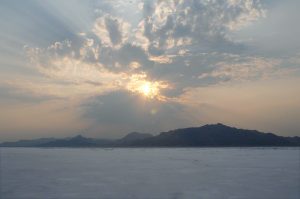 Sadly, the roadside dramatic reveal has somewhat withered. The immense salt playa has shrunk, the bright white salt that once hugged either side of Interstate 80 is patchwork now, dirty in other spots mixed with the mud, or absent altogether and the ubiquitous sagebrush has moseyed back onto the plain.

I’ve seen this happen in just the past 20 years, but worry not, there is plenty left to astound you and for most racers to try their luck upon. Let’s talk about those racers, those wonderful, marvelous, inventive amateur folk who put on the best damn mechanical circus in the whole wide world.

Know this: You can be one too. Yes. You can earn a time slip driving your own car, truck, or bike at some events. Just try that at Indy or Daytona.

I don’t care if you don’t know a spark plug from a wheel hub, walking through the pits and staging lanes up to the starting line is a visual treat on multiple levels. Watching the speed machines roll off on a run, or flash through the mile-markers is an eye-candy spectacular. Lucky you if you get to see a parachute blossom.

There are hundreds of cars, trucks and motorcycles in race ready form, each the dearly held dream of someone about to face the truth of the timing clocks.

None of these speed machines come to the salt all by their lonesome. Each has a team, a few are big deals, but most are a small gatherings of like-minded speed hopefuls who will be delighted to tell you darn near anything you might want to ask of them.

This is the core of land speed racing, what gives the sport its fantastic edge over every other form of motorized competition on the planet: the people!

Be bold, walk up a 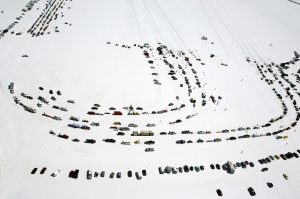 nd introduce yourself, ask them about the machine, who designed it, built it, drives it and THEN ask how fast it goes.

This is a welcoming sport in an inhospitable place. Be assured, it experience will last long after you return to “normal” life. If you experience an unexplained sadness or sense of loss, you have been afflicted with “salt fever” and the only way to medicate away the symptoms is to return as soon as possible.