Below is an open letter to the BLM that took about 10 minutes to write after  years researching the historical aspects of the Bonneville Salt Flats. It is well known that I have an affinity for land speed racing, yet my American citizen self is simply fed up with the pretty talk and well-crafted run around that has been given the motorsports community.

What set me off was the last-minute “chicken-out” by Kevin Oliver, BLM District Manager who was to be part of a frank, public discussion about the plight of the salt flats hosted by the Salt Lake City Tribune. It followed an article by reporter Emma Penrod. The land speed racing community has tried for years to engage the BLM in meaningful discussion to preserve the salt flats, always met with another study, delay, or privacy excuse. 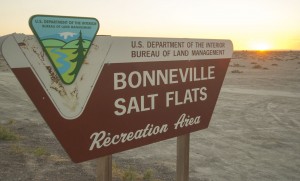 Because the leadership has frequently changed, the matter has been regurgitated at least 5 times since I became involved at the close of the last century. In the meantime, the Bonneville Salt Flats continues to wither away unchecked and unloved by the very people who are charged with its protection. In my opinion, it is like a parent allowing a child to be repeatedly molested — for money no less.

I am fully cognizant of the horrific metaphor posited above so I invite you you examine the satellite images below below before you label me a special interest nut case.

I thank Ms. Penrod for her attention to this situation. However, this situation needs the full-court press of the SLC Tribune editorial board to crack open the government doors of shame and shed factual light on the salt’s grievous plight.  And if the Deseret News would join in recalling the 40 years of unselfish contributions by Ab Jenkins who gave the LDS folks the coolest racecar mascot ever, the Mormon Meteor, then there might yet be hope for amateur, family racing on the Bonneville Salt Flats. One or two tidy little reports are of no consequence at this juncture. no matter how well-meaning.

The salt is in serious trouble. For 15 years I have researched the science, the mining, the history, the mania and mundane trying to figure out a way to make the BLM do its job. The racing community wants nothing special, no favors, no extra work, just see the BLM be the stewards Americans expect them to be. Just like they have been to the Grand Canyon, the exalted California redwoods, the glorious Steese National Conservation Area and the sweltering Jupiter Inlet Lighthouse Everglades.

I look at those satellite pictures and fight the urge to tear up.

You were conspicuous by your absence in the Salt Lake Tribune’s  podcast discussion about the plight of The Bonneville Salt Flats today. Many, many racers have grumbled that the BLM refuses to engage in meaningful dialogue with its recreation users, as evidenced by being especially cagey during the last round of mining permit negotiations. Your last-minute refusal to participate today seems to justify their perspective.

Is there a reason why you will not engage in serious public discussion about this issue?

As the BLM is charged with the duty to be stewards of our public lands, I find it puzzling how the Bonneville Salt Flats have been allowed to be systematically and geologically raped for decades. Is the revenue stream so important that it trumps the health of our federal land? That Bonneville is also on the Register of Historic Places makes the BLM’s failing so much more egregious.

I say this with all due diligence done for many years seeking  to understand the ecological and hydrological aspects that impact the health of the salt flats.

The abundance of rain has washed away the fragile buffer the recreational racing users had been clinging to for more years than they should have. I see this as “situation critical” and wonder why the BLM does not exercise its chartered role as leaders to take immediate steps to halt the degradation and implement a remedial plan without further delay.

Too much talking, too little acting.  It is a situation like this that leads me to believe the Civil Service has far too many protection points for employees.

For decades the mining companies have, with BLM permission, under permit, systematically and geologically raped the Bonneville Salt Flats. Industry is not to blame, they do what they are told in the language of their permits. It is the BLM that has failed the American public on so many counts by not requiring the mining concerns to replace what they remove.

Yes, yes, there is the nice little section that says they must put things back the way they found it BUT the mining firms can wait until they are done mining. If that continues, not only will all the amateur land speed racers comprised of hundreds of families get screwed, but the once magnificent sparkling halite playa will be lost to our memories. People, the flats were used by the astronauts as a navigational aid, this is a BIG deal.

Ironically, the miners don’t want the salt as it is a mere waste product once the valuable potash used for fertilizer is extracted.

There is no concerted, coalescing effort to stave off the inevitable in my opinion. The Save the Salt Coalition, born out of the racers Save the Salt group, has talked much, done very, very little substantive, effective work. As for Dr. Bowen’s research at the University of Utah, I’d like to know who funds her research. Is it any of the mining concerns?

The State of Utah, its citizens – racers or not — need to understand the Bonneville Salt Flats need attention and need it NOW.

Much as it might grate upon the hard line environmentalist, land speed racers have been the unflinching stewards of the salt for more than 60 years. Keeping it pure and unmolested has been their goal as evidenced by their conduct.

This family-based sport continues to welcome not only Americans with a “can do” attitude, but encourages innovations in science, technology, engineering and transportation safety. Land speed racing can be described as “the last vestige of the Wild West” where today all the ponies are under the hood.

College kids have come to Bonneville with their school project and shown us that used french fry oil can safely power a truck and that 300MPH is possible with batteries. Grandmothers and grand dads have eschewed rocking chairs for race cars driving safely, repeatedly and gloriously in excess of 250MPH. Families thrive here. This place is fun and it is sorrowful that business pummels the flats to death simply because the BLM stewards have been outrageously lackadaisical in their duties for decades. The BLM actions suckle upon the teat of revenue and ignore the cries of the recreation user of what amounts to geological rape.

The “fault” lies surely at the doorstep of the BLM and I do not mean the Salt Lake City district office. The problem is with the Washington DC crowd who simply see the place as a tidy little revenue stream through leases. The lessees negotiate in good faith and sign a contract which requires them to vigorously comply with the terms of the contract or lose their rights. I do not heap any blame upon them.

This is not secret stuff, hidden from view. Most all involved with this sport know these things. Knowing this, how the hell did the recently negotiated mining permits NOT call for a replenishment of the salt? It is utterly contemptible, not to mention a clear dereliction of duty (in my opinion, shared by many) to protect our federal lands.

How long do you think lessees would be allowed to dump toxins in the Grand Canyon, or park radiological waste at the foot of Mount Rushmore?

The Bonneville Salt Flats are a natural wonder unique on the North American Continent, that despite its designation on the Register of National Historic Places, is protected with the vigor of a drunken slug by our federal stewards.

And shall we also have a chat with the BLM about why they never required the failed brine shrimp companies to remove the various dykes they allowed to be installed that now egregiously impede the natural winter littoral movement? I had several long talks with the US Geological folks and those dykes are an certainly an impediment.

You don’t need a science degree to see the damage, but we need someone in government to show the Bonneville Salt Flats a little love and caring tenderness right now.

Click on the image below to see the dramatic salt loss in seven years. Natural ecological forces combined with relentless mining for decades is wiping out in a century what took thousands of years to create.